Cyber-attacks are increasing day-by-day in the news and the types of cyber-attacks are becoming more varied and sophisticated. We thought it would be worth highlighting ten of the most significant cybersecurity statistics of the year so far.

1. Ransomware is usually thought of as being used to attack average companies.

The threat of ransomware now extends to nations and their critical national infrastructure. Many cybercriminals aim to destroy information or cause distractions, rather than purely seeking financial benefits. Here’s some stats:

2. Ransomware cost businesses more than $8 billion per year in 2018!

This is an incredibly high increase compared to 2016, when the annual cost of ransomware was estimated at $1 billion. It’s also important to mention that the money is only a part of what a company loses. The company’s reputation, the downtime it may cause, and other factors all amount to disastrous consequences behind these ransomware statistics.

3. The next big threat comes with the increase in mobile attacks and targeting mobile platforms.

Over 20,000 installations of mobile ransomware trojans were detected up to the end of 2018. Mobile attacks have risen by 54% according to reports, but this is not helped by people not updating their devices, with only 20% of Android devices being updated.

4. 87% of healthcare organisations will have started using IoT technology in some way by 2019.

This signifies the way the world is changing. The increase in IoT is likely to be the number one use of IoT for patient monitoring followed by remote operation and location services.

5. Around 7 out of 10 businesses are not prepared to respond to a cyber-attack.

Hiscox’s 2018 Cyber Readiness report gathered information from 4000 companies in UK, US, Spain, Germany and Netherlands and showed that 73% of companies are just not prepared.

There is no singular reason to explain lack of preparedness, but it could be down to lack of resources, budget or just general lack of awareness. However, the first place to start is to have a clearly defined cybersecurity strategy in place. This should include a budgeting process, a set structure of processes, and awareness of ever changing compliance requirements.

Whilst the ever-increasing use of IoT devices and connected devices may seem convenient to many, it also allows hackers to access more personal information. Before long, hackers will have an easier time gaining access to all of our information within a few clicks. Many IoT devices are known to have vulnerabilities that include weak passwords which cannot be changed and some even allow remotely access and/or control. Both weaknesses mean a hacker can gain access into other connected devices on the network.

7. 92% of malware attacks are via malicious emails.

This is quite a staggering fact, but not surprising when you consider the mass amount of emails that we open every day. This makes it the quickest and the easiest way for hackers to perform network security attacks disguised as malicious code in an invoice or receipt, for example. Stats from 2018 show that one in every 412 emails had a malicious attachment on it.

8. A cybersecurity breach has been identified in 32% of all businesses in the UK in 2018.

Studies around cyber awareness released in early 2019 have revealed that one third of all businesses and over a fifth of charities in the UK have come under attack in the last 12 months.

A 2018 study predicted that this is the number of actual breaches, not the current reported breaches. This is due to new legislation that will reveal reports that will lead to 90% of breaches in North America being known. With this information coming to light, the US will stay at the top of the priority list for hackers, since that’s where the most valuable information is.

10. The cybersecurity unemployment rate is approaching 0%!

If you are looking to work in cybersecurity, then now is the time to do it! By 2021 – the same year that cybersecurity will cost us $6 trillion – jobs are predicted to hit around 3.5 million. The cybersecurity sector urgently needs skilled staff and they are needed now.

As cybersecurity threatens to derail businesses, everyone is looking for talented cybersecurity enthusiasts, so check out IRM’s current vacancies to see if you can help. 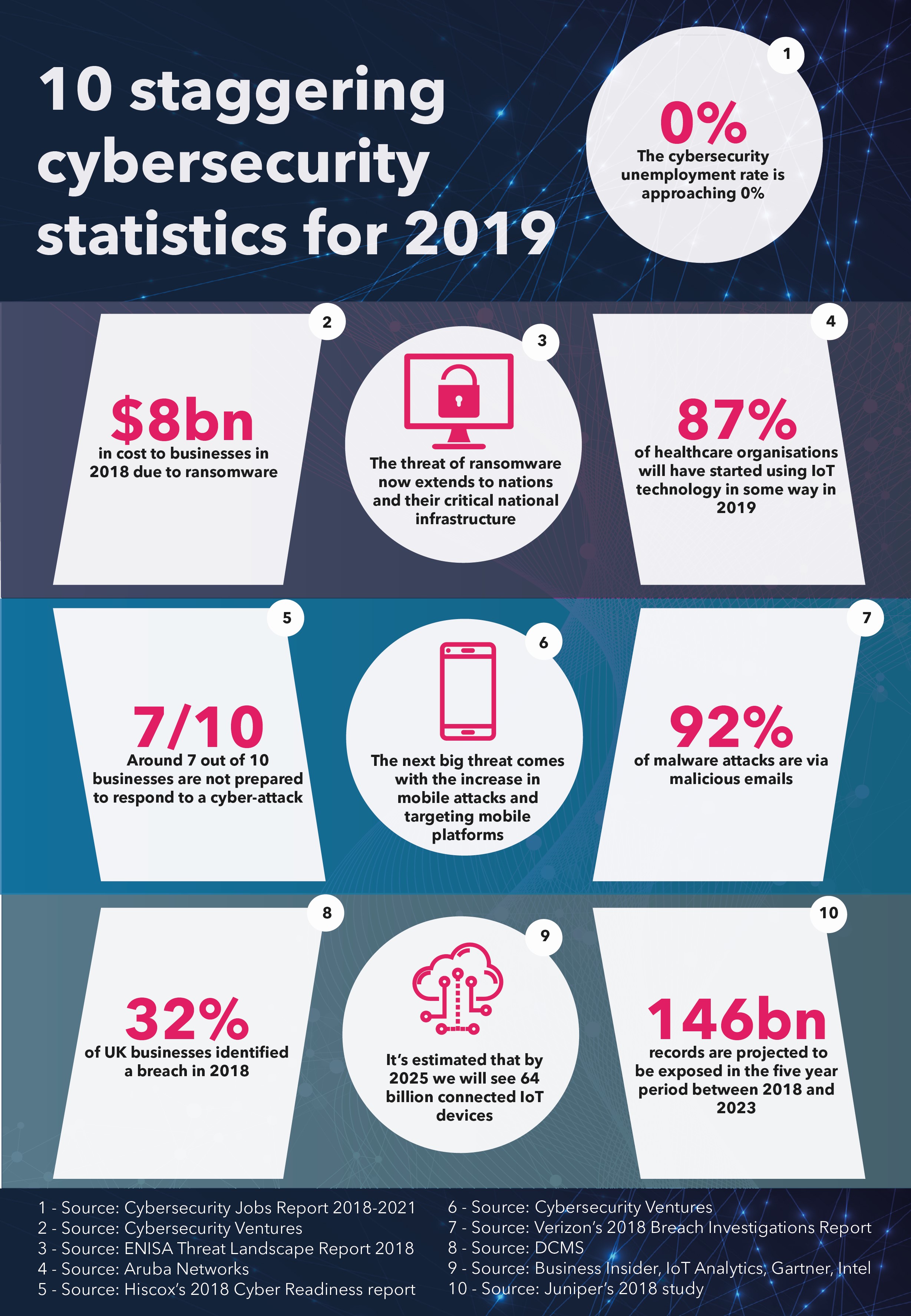